We Are Heirs Release New EP 'Awaken Me'.

America is at a spiritual and social crossroads as racism, police brutality and the unsettling political climate now dominate the evening news. However, syndicated radio personality Cory "Coco Brother" Condrey believes Jesus Christ is the answer to America's various challenges. Performing under the banner of The Stand Campaign, Condrey has assembled a team of gifted artists to create the #America (Tyscot Records, LLC) album that serves as the musical soundtrack to Condrey's STAND movement that urges Christians to radically stand against racism, police brutality and the revenge killing of law enforcement officials, with a message of love and hope. The album hits brick-and-mortar retailers and digital music platforms everywhere on September 9th.

Q:  Thank you so much for your time.  What prompted you to record analbum that addresses the needs of America?

You are welcome!  It's needed....the Church today is way to quiet.

Q:  What do you think is (are) the core issue(s) America is facing right now?

Q:  And how is Jesus the answer to these problems?

Lol!  He is the answer to all problems.  Through faith in Jesus, Godteaches us how to be better citizens, better mothers, better fathersand better people.  If anything is going to change in our nation thechange must begin with each individual person starting with ourselves.

Q:  This new record is a collaboration between yourself and many artists.  Who are some of the singers involved on this project?

I chose Joann Rosario Condrey for her heart and passion towards thethings of Christ.  Da Truth has been consistent with all of his musicand in his stance for Jesus.  I chose to reach out to new artists aswell,  because in this season new voices and new sounds are important.  I am excited to introduce new voices like Cynthia Rosario, T.J.Pompeo, Yung Honore,  and J. Paul.

Q:  Did you write all the songs on the album?

No, I wanted the artists to be able to express themselves fully but Iwas very instrumental in producing the whole project.

Q:  Of all the issues addressed on the record, which one is mostpersonal to you? And why?

Lol....good question!  All of them, because each one deals with thethings that are happening in America today.  Take the title song'America' which addresses the murders/police shootings in America.'We Declare War' is basically a call to action to Christians to stopbeing silent, to get into position and become the change that you wantto see.   'Born Again' with Joann cites that we must be born again,without Jesus we're nothing.  Every song on the CD will pierce yourheart.  It's life music, not religious.  You should really downloadthis CD.....

Q:  You are also involved with the STAND campaign, tell us more about this?

Stand is the Campaign that promotes Jesus Christ.  Our main goal andfocus with the Stand Campaign is to push Jesus to the culture in arelevant way.  In doing that, we are hosting prayer rallies, concerts,large and small events....taking over radio, taking over television.Most importantly  we are making our presence known in the streets.

Q:  How can our readers be involved with the STAND campaign? 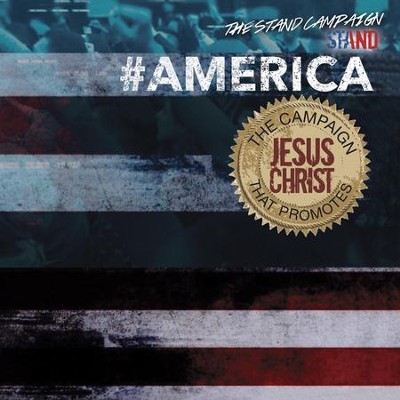