David and Tamela Mann with Shaun Saunders received the NAACP Image Award for Outstanding Literary Work - Debut Author for Us Against the World: Our Secrets to Love, Marriage and Family during the 50th Annual NAACP Image Awards March 30, 2019 at the Dolby Theater in Los Angeles. The book is published by W Publishing, an imprint of Thomas Nelson.

"We are honored and blessed by the recognition from the NAACP Image Awards for our book Us Against the World," said David and Tamela who are currently performing before sold-out crowds on the Tyler Perry Madea Farwell Tour. "We hope readers are uplifted, spiritually encouraged, and feel inspired about love, family, and marriage when they read it."

With a relationship spanning more than 30 years, David and Tamela are just as, if not more than, happily in love as they were in the early days of life together. In their book, Us Against the World: Our Secrets to Love, Marriage and Family, the superstar couple who has delighted and inspired audiences through music, plays, movies, and the television series' Meet the Browns, The Manns, and Mann & Wife, candidly share a wonderfully inspiring, funny, and up-close look at their lives while offering hope and practical advice for building a strong relationship, marriage and family in the W Publishing book.

"Thomas Nelson is incredibly proud to be a part of David and Tamela Mann's ministry. We are also deeply honored that the NAACP Image Awards has recognized the contribution of their book Us Against the World to supporting the spiritual and emotional health of African-American families and communities," said Daisy Hutton, vice president and publisher, W Publishing. "The talent and commitment of the Mann family inspires us all to give our best back to the world every single day that we are in it, and their humility, faith, empathy, and tenacity challenge us all to work each day at becoming a better version of ourselves.  David and Tamela Mann are extraordinary human beings, and Us Against the World is an extraordinary book that will continue to help foster healing in marriages and families for many, many years to come." 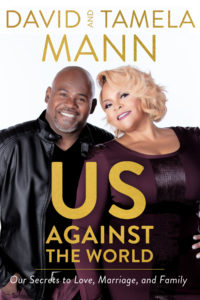 For the latest updates on David and Tamela visit:

Tamela Mann is a Grammy® Award winner, three-time NAACP Image Award® winner, BET Award winner, Billboard Music Award winner, Stellar Gospel Music Award winner, and GMA Dove Award-winning singer, actress, songwriter, producer, and businesswoman. Tamela's award-winning album Best Days debuted at No. 1 on multiple Billboard music sales charts and includes the No. 1, RIAA-Platinum certified single "Take Me to The King." Tamela set a historic personal and industry record as the first Gospel lead artist in Billboard Gospel radio chart history to score three consecutive No. 1's from an album. The string of hits includes "Take Me to The King," "I Can Only Imagine," and "This Place." Tamela's Billboard chart-topping fourth solo studio album One Way features the Billboard No.1 singles "God Provides" and "Change Me." In 2017, Tamela broke the record for the most No. 1's in the history of Billboard's Gospel Airplay chart when "Change Me" became her sixth leader. Tamela co-stars with husband actor/comedian David in the hilarious TV comedy, Mann & Wife, and their family docu-series, The Manns. Together, the couple heads up their independent entertainment company Tillymann Music Group.

Ingeniously funny and extraordinarily talented are understatements when it comes to David Mann, the multi-faceted, two-time NAACP Award-winning actor and comedian. A native of Texas, David masterfully showcases his God-given talents in a most dynamic and distinguished way. His musical and theatrical talents brilliantly epitomize ingenuity at its best. Along with his wife, Gospel singing sensation Tamela Mann, David co-stars in the hilarious TV comedy, Mann & Wife, and their family docu-series, The Manns. When David is not on set shooting, producing or directing, he brings his live comedy show to venues around the country playing to capacity crowds. David, together with Tamela, head up their independent entertainment company Tillymann Music Group.

ABOUT THOMAS NELSON
Thomas Nelson is a world leading publisher and provider of Christian content and has been providing readers with quality inspirational product for more than 200 years. As part of HarperCollins Christian Publishing, Inc., the publishing group provides multiple formats of award-winning Bibles, books, gift books, cookbooks, curriculum, and digital content, with distribution of its products in more than 100 countries. Thomas Nelson is headquartered in Nashville, TN. For additional information visit www.thomasnelson.com.