Julius Kim Selected as President of The Gospel Coalition

The Crabb Family Unveils Details of their New Album "20/20"

Weston Skaggs Returns with New EP 'Till I See You Again'

Rosaria Butterfield’s "The Gospel Comes with a House Key" Surpasses 100,000 Copies in Sales

Beth Moore Challenges Us to Flourish in Life with New Book

The song is a wakeup call to all of us reminding us that life bares no meaning unless Jesus is in control.  The #! hit tells the story of a young mother who lwas driving in a late-night Christmas Eve drive on a snow-covered road on her way to Cincinnati, Ohio.  The woman begins sorting out her emotions and bemoans not having enough time to do the things that really matter.

Then, her car hits a patch of black ice, causing the woman to lose control of her car. She panics, takes her hands off the steering wheel and cries out to Jesus; shortly thereafter, the car stops spinning and safely stops on the shoulder. After taking stock of the situation (and seeing that her baby has remained fast asleep in the rear seat), the woman decides to let "Jesus take the wheel" of her life. 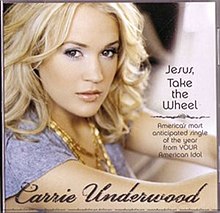 "Jesus Take the Wheel" was written by Brett James, Hillary Lindsey and Gordie Sampson. Brett James in chatting wih the Boot tells the story behind how the song was written."My wife had a similar experience to the girl in the song: My wife had a car crash when we were dating. She nearly died. Her car spun around several times and went under an 18-wheeler. She said she saw angels come help her. She walked away with no injuries. I thought it was interesting that she had that same situation happen to her like the girl in the song.

It became such a neat song because it touches people. Those songs are really special.

We really had no idea who was going to record the song. When Carrie recorded it, it was one of those magical things when you get the right artist and the right song. This happened to be one of those songs.

That will always be one of the most special songs to me."

"Jesus, Take the Wheel" won Grammys for Best Female Country Vocal Performance and Best Country Song, and it won Single of the Year at the 2005 Academy of Country Music Awards. The song ranked number four on CMT's 40 Greatest Songs of the Decade.