Producer Andrea di Meglio Shares Insights About the New Film CHRIST IN YOU: THE VOICE

New Film CHRIST IN YOU: THE VOICE will Premiere Online July 16-19

The Color of Compromise: The Truth about the American Church's Complicity in Racism by Jemar Tisby has landed on the New York Times Best Sellers list for June 28, 2020, at #13 in the Paperback Nonfiction category.

"Naturally we are pleased with the renewed interest in The Color of Compromise. But it's not just the number of units sold. More importantly, we are proud to be Jemar's publisher and thankful that his message is resonating with readers at this pivotal moment in American history. It is our hope that his words will change the hearts and minds of everyone they touch," said Stan Gundry, senior vice president and publisher of Zondervan Academic and Reflective.

"I'm feeling a mix of emotions right now," says Tisby, who is co-founder and president of The Witness: A Black Christian Collective, and a PhD candidate in history at the University of Mississippi. "It's great news that my book has made the New York Times Best Sellers list. But at the same time, knowing what it took to get there and what sparked this renewed interest in the topic of racial justice-the murders of George Floyd, Breonna Taylor, Ahmaud Arbery, and on and on-is sobering."

In the aftermath of those tragedies, people also seem to be turning to books: The Color of Compromise is one of 14 out of 15 books on the list that address racial justice.

In The Color of Compromise, Tisby surveys America's racial past, from early colonial days through slavery and the Civil War, Jim Crow laws and the Civil Rights era, to the Black Lives Matter movement, uncovering the roots of sustained injustice. He exposes the concrete and chilling ways people of faith have actively worked against racial justice, and the deafening silence or overt opposition of the white evangelical majority. Historically, the majority of the American church has failed to speak out against this evil.

"Paradoxically, although this is a book about the past," Tisby writes, "it is really about the future of the American church." He charts a path forward with intriguing ideas that challenge us to reverse these patterns and systems of complicity with bold, courageous, and immediate action.

Tisby's next book, How to Fight Racism: Courageous Christianity and the Journey Toward Racial Justice, will be released on January 21, 2021. 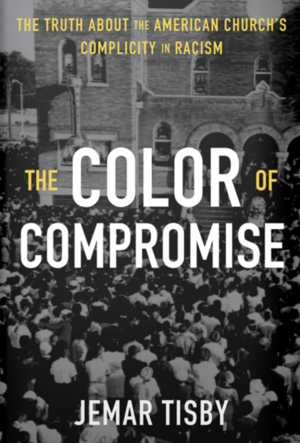 Jemar Tisby (BA, University of Notre Dame; MDiv, Reformed Theological Seminary) is president of The Witness: A Black Christian Collective, where he writes about race, religion, politics, and culture and cohosts the Pass The Mic podcast. His writing has been featured in The New York Times, The Atlantic, and CNN. His latest piece for The Atlantic is "The Familial Language of Black Grief." Tisby is a PhD candidate in history at the University of Mississippi with a focus on race, religion, and social movements in the twentieth century.